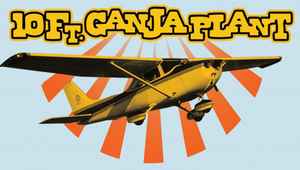 Profile:
10 Foot Ganja Plant (also stylized as 10 Ft. Ganja Plant) is a roots/dub Reggae group primarily based in upstate New York that is a spinoff collective of the popular group John Brown's Body, and is spearheaded by former JBB dub engineer Craig Welsch. The group lineup does not consist of the entire JBB lineup, often employing the assistance of many special guest artists.

One of the main keys to 10 Ft. Ganja Plant's legacy is their consistent shroud of mystery, considering that, for the most part, fans are baffled as to whom the unfamiliar guest artists are in particular as there are often no personnel credits featured on any of their albums. Their key vocalists, however, were Ras Jay Champany and former JBB lead singer Kevin Kinsella. While their music today has a wide range of styles, most of their music often has a more traditional vintage '70s Jamaican sound to it.