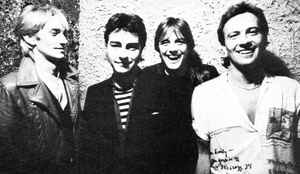 Profile:
The Freshies were formed in 1977 as a vessel for Chris Sievey's more serious pre-Frank Sidebottom material. Over their five years of activity, The Freshis self-released three studio albums on cassette; All Sleeps Secrets (1977), featuring Sievey on all instruments; the Girls from Banana Island (1979), and finally, Rough 'N' Ready (1980).

In 1982 Sievey revived The Freshies as a duo with Barbara O'Donovan. They released one single, Fasten Your Seatbelts, before once again dismantling.