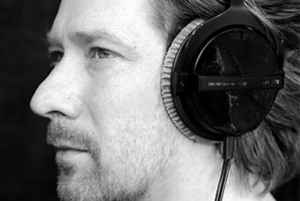 Real Name:
Arno Peeters
Profile:
He is a self-taught composer: in 1983 (just before the ‘DJ-age’) he started to experiment with simple hifi-equipment, trying to emulate the effects and sounds of electronic (pop) music like Laurie Anderson, Art of Noise and Coil.

In 1986, he joined the Centre for Electronic Music where he was able to take his experiments in professional studio-environment. In 1989 he was one of the techno-pioneers in the Netherlands.

In the years that followed, he made several records and CD’s in the emerging electronic dance-scene, but foremost he was searching for ways to renew the genre. Disappointed by the conventions of this style of music, he turned away and applied himself to more experimental music.

In 1996 he created “AeroSon”, a 40” sound collage as an admission to the International Rostrum for Electro-Acoustic Music (IREM). It won him the first prize in the category ‘Composers Under 30”.
Since 1998 he is a freelance radio producer with the Netherlands Program Service (NPS), teacher at the CEM-studio and composer and producer of both commercial productions (remixes, leaders and advertising) and experimental music and sounddesign. From time to time he is involved in recording on location for film, music or educational DVD’s.

With his own one-man company and studio Tape TV Productions, located in Utrecht, he assembles, edits and mixes for radio, film and games on a regular basis and specializes in surround sound and audio within interactive applications. His personal interest however lies with experimental music and soundscapes. Together with artist Iris Honderdos he completed several installations and performances, most recently in Hanoi and HaLong (Vietnam 2006 - 2007), Finland (2008) and Armenia (2010).
Since 2011, they have done several projects for other NGO's like Meshwork and the Royal Tropical Institute in Sierra Leone, India and Uganda (2012)

Due to his widespread experience in the area of sound and music, festivals and organizations acquire his help as consultant for audiovisual solutions or as an aid in setting up the program. He also is an advisor for the (Dutch Cultural Media Fund.
Sites:
arnopeeters.com, SoundCloud, YouTube, Last.fm, MySpace
Aliases:
Mixmaster A2daP, Spasms, Tape TV Music Productions, The Implant, TJ Tape TV
In Groups:
African Nightflight, Cultureclash, Da Definite No Remorse, Random XS, The Awax Foundation, Urban Electro, Voltage Control
Variations:
All | Arno Peeters
A Peeters, A. A. Peeters, A. Peeters, A.A. Peeters, A.A.Peeters, Arno Peters