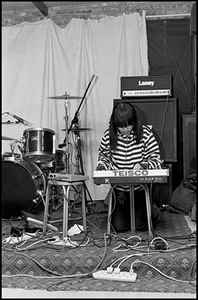 Profile:
Beijing's Shenggy is one of the new generation of avant-garde representatives in China.
Since 2007, she has been living in london, studying European philosophy also starting her new music career in Europe.
She started her music career in 1998 as a drummer when she was 16 years old, Until 2006, she was the drummer in Beijing legends Hang On The Box, but since 2003, her work has increasingly demonstrated her own unique form of cosmic industrial sound.
In February 2006 she formed a new unit, White, with Xiao Wang of Carsick Cars, with the aim of developing a form of cosmic industrialism.
She is also currently working on a solo performance art project that is focused on creating sonic universes with only her voice, Korg MS-20 synth, tape recorder, and a handful of samples with analog sound.
Sites:
MySpace, MySpace
Aliases:
Cosmic Shenggy, Shen Jing
Variations:
Viewing All | Shenggy
Cosmic Shenggy, Shen Jing, Shenggy Shen, Shenngy