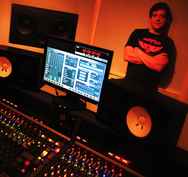 Profile:
Dan began his engineer/production career working in New Order/Factory records studio 'Suite 16'. From here he went on to hone his skill in various in the UK, Sony studios, Whitfiled st, Miloco and Strongrooms to mention a few.

Recent times has seen Dan be nominated for MPG's 'Best Newcomer - Producer of the year 2009', working with 'BBC sound of 2010' band Delphic and flying out to Paris with Hip hop artist Tricky, becoming his personal engineer and mixing material for him as well as other artists on Tricky's own label 'Brown Punk'.
Variations:
Viewing All | Dan Hulme
Danny Hulme