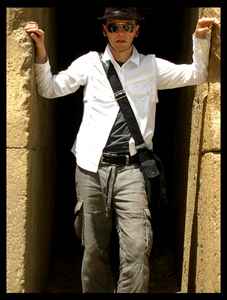 Real Name:
Dustin Donaldson
Profile:
Mercurial and influential Composer, Stage performer, Producer, Multi-instrumentalist, Visual artist and filmmaker.
Co-founder of Thought Industry (1989-94) and I Am Spoonbender (1997-).
Member of Pansy Division (1995-96), among many other group and single-artist affiliations.
His general modus operandi is a relentless never-the-same-thing-twice, outer-limits exploration- usually with ample doses of pseudonyms (which he has called "creative freedom through anonymity"). For example, Donaldson is rumored to be the 'secret' drummer on certain major contemporary recordings, however his extensive use of stage names (post 1996) makes precise detailing difficult. He is known to have toured and recorded (in various roles) with disparate artists such as Link Wray (there is a known video of the group performing on the Conan O'brien show), Damo Suzuki and Michael Karoli of Can, Pleasure Forever, David Cross and Bob Odenkirk's Mr. Show, etc. In 2008, Donaldson appeared with The Boredoms as a 'drum leader' for their 88BOADRUM event.
A 2011 Youtube interview with Donaldson revealed that he is currently finishing a film based on his recent cave-painting discoveries found while exploring the Egyptian Sahara Desert.
Aliases:
Shitty Bicker
In Groups:
Duh, I Am Spoonbender, Pansy Division, Thought Industry
Variations:
Viewing All | Dustin Donaldson
Donaldson, Duh Stin, Dustin, Dustin Thomas Donaldson, Dustin Thomas Donaldson