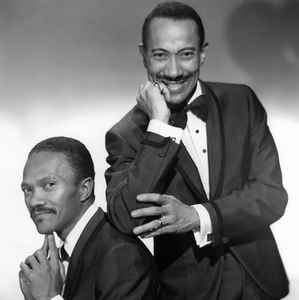 Profile:
American vaudeville duo of brothers Fayard Nicholas, born 1918, and Harold Nicholas, born 1924, who grew up in Philadelphia.
From 1932 to 1934 they worked at the Cotton Club in New York, appeared in movie Big Broadcast of 1936, toured England with a revue, returned to the Cotton Club in 1938. From 1958 to 1964 they worked apart, Harold in Paris, and Fayard in the USA and Mexico. They made some recordings, but are best remembered for their appearances in films.
Members:
Fayard Nicholas, Harold Nicholas
Variations:
Viewing All | The Nicholas Brothers
Les Nicolas Brothers, Nicholas Brothers