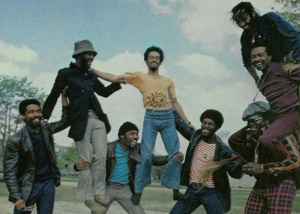 Profile:
Formed 1971 in London, England featuring musicians from Guyana, Jamaica and Saint Vincent. The name Cymande is based on a calypso word for dove, symbolising peace and love. They play a style of music that they call Nyah-Rock: a mixture of funk, soul, reggae and African rhythms. The band achieved their greatest initial success in America and were actively recording and performing until 1975.

Following the appreciation and support of their music by Hip-Hop luminaries such as Kool Herc, DJ Jazzy Jay and Grandmaster Flash, their music has been used since the 1980s in loops and samples by some of the genre's leading artists. It has also been featured in films.

October 25, 2014
The exact english pronounciation of the name of the band : Sea-man-day
When I listened their first album for the first time, just 1 month ago, it was really a slap in the head. What an album !!! And now I learn that they have just reformed the original band line-up, doing lives again, and releasing a new album. I definitely stay in thune.

July 15, 2014
Heard a few tracks from the new album and sounding really tight so far. Looking forward to the reunion shows and new album :)

If you're into the hot compilations such as 'Super Disco Brake' and the like, you probably hear of Cymande's classics "Dove" and "Bra".
Cymande name was created due to one of Calypso's main characters called Dove. With South American origins, it's a testament for 'Peace and Love', and their music, formerly baptised as 'Nyah-Rock', is a fantastic blend of wonderful rhythms, from Jazz to Soul, Rhythm & Blues, Funk, Caribbean music and specially Calypso.
The atmosphere is very deep, intense, and at the same time rhythmic, funky, soulful, with Caribbean and South American Music flavors.
Based in London on the very early seventies, Cymande was composed by the bassist Steve Scipio, Joey Dee & Ray King on the vocals & percussion, Derek Gibbs on the Alto/Soprano, Pablo Gonsales on the Congas, Peter Serreo (Tenor), the wonderful guitarrist Patrick Patterson, multi instrumentalist Mike Rose (Alto/Bongos/Flute), and Sam Kelly on the drums.