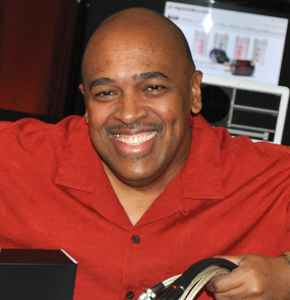 Real Name:
Herb Powers Jr.
Profile:
Legendary mastering and lacquer-cutting engineer who worked for years at Frankford/Wayne Mastering Labs' NYC facility and was responsible for cutting a respectable share of classic Prelude and West End titles, as well as tons of disco, house, funk, and hip-hop classics over the years.
Herb still does lacquer-cutting and vinyl mastering, but most of his business is now in the digital domain. He owns and operates his own mastering facility called PM Entertainment, a.k.a Powers Mastering Studio.
He almost always includes shout-outs and dedications inscribed in the run-out groove "dead-wax" of his earlier vinyl work, followed by one of his numerous signatures and his trademark smiley face.

April 16, 2020
We rarely talk about him but he’s everywhere on our Shelves
Maybe one of the most important person in the 70 & 80 decades in the black music industry !??
So talented that he had monopoly and in my mind he worked night and day like a slave
But sure it’s been a pleasure for him

Always smiling on pics, seems to be a nice person. I better understand the smileys on dead wax ;)

Thanks a ton Man

Just wondering if he became close of some soul funk artist, if he tried to produce something, what’s his taste, did he’s more on soul side, disco, boogie, electro ?

So curious about him as he handled tons of original tapes in his golden hands
And many have never been released moreover... he probably heard some insane lost tapes

July 7, 2019
Found his beautiful name etched on the vinyl of Ashford and Simpson album Street Opera, which I just pulled out of storage. It sounds meticulous. Had to look him up. Incredible mastering.

April 1, 2016
Herb Powers was a staple for me in my DJ career. When I saw a record mastered by him,i know I was in for a treat. I was actually angered to find some of the records I liked NOT mastered by him,once i got home them from the record store. But given the large amount of gems he made sound so good,he couldn't be everywhere or on every record. He's a friend on Facebook that I got the opportunity to chat with recently. Hats off to you brother,I hear vinyl is making a comeback,and I only hope you're part of it!!

The Rudy Van Gelder of the Electro / Funk scene (with best respect to both engineers) ;))

February 23, 2015
Herbie! Thanks for all the great sounding classics ; )
Reply Notify me 3 Helpful

March 29, 2011
Of the hundreds of records I have listened to where I see the Herbie Jr etching in the runouts, all mastered nearly perfectly. This man has done the music world a huge favor one record at a time in a career spanning way longer than I have been alive.

What I always found fascinating is how he is able to saturate the mids and high range frequencies without even the slightest bit of artifacting or distortion, i.e. the hi hats always sound super crisp yet don't jump out of the speakers and hiss you down.

Same goes for the bass, especially 808 kick drums, which always seem to be mixed PERFECTLY and punch hard even on a not so great stereo. I bet an 808 would boom on a clock radio speaker if Herb mastered it! :)... Keep in mind this quality has been in effect since the late 70's. I guess I could go so far as to say the final mix on a lot of Def Jam / Profile / Capitol mid to late 80's rap records was DEFINED by Herb Powers. Just listen to a lot of today's pop rap which uses essentially the same TR-808 / 909 drum kits and tell me if it hits as hard or as clean. NO? WHY NOT? Because sadly this is a gift that is fading from the studios and engineering process of recorded music.

Modern technology will allow anyone to record, mix and release an album from their bedroom now..... but will it ever replace the God-given talent of making it sound like Herbie Jr mastered it?
Reply Notify me 15 Helpful

January 17, 2008
I grew up having a close relationship knowing the Powers family. Herb, his wife and children were always happy people,pleasant to be around. Now i know, its a credit to Herbs humbleness and his layed back persona. I always knew Herb had a good job, I just never knew how blessed and accomplished he really was. To me he was the everyday family guy, the handyman, or the guy who had a nice car on the block. To others, he is the constant worker and dedicated professional who has had a lifetime of achievement within a career survived by longevity. He is the definition of dedication and success, he has always been a role model for me, he is Herb Powers Jr, and he is certainly one of a kind.