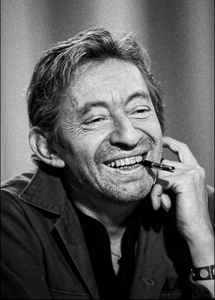 Serge Gainsbourg (born Lucien Ginsburg), wanted to be a painter but earned his living as a piano player in bars. He was tapped to join the cast of the musical 'Milord L'Arsouille', where he reluctantly assumed a singing role; self-conscious about his rather homely appearance, Gainsbourg initially wanted only to carve out a niche as a composer and producer, never as a performer.

His early influence was Boris Vian. Gainsbourg wanted to free himself from what he considered old-fashioned 'chanson' and explore other musical grounds, influenced especially by British and American pop. He also wrote soundtracks for more than 40 movies and directed himself in four movies: 'Je t'aime... moi non plus' (10 years censored*), 'Equateur', 'Charlotte For Ever' and 'Stan The Flasher'.

* Je T'aime ... Moi Non Plus (1969) the song, featured simulated sounds of female orgasm. Originally recorded with Brigitte Bardot, it was instead released with a future girlfriend Jane Birkin as Brigitte Bardot backed out. The song was censored in many countries and in France even the toned-down version was suppressed. The Vatican made a public statement citing the song as offensive. Its notoriety led to it reaching no. 1 in the UK chart.

A frequent interpreter of Gainsbourg's songs was British torch singer Petula Clark, whose success in France was propelled by her recordings of his tunes but the first English-language version of a Gainsbourg song was Dionne Warwick's 1965 version of 'Mamadou'.

Concept album Histoire De Melody Nelson produced and arranged by Jean-Claude Vannier was somewhat based on Nabokov's novel Lolita. It has proven influential with artists such as AIR, David Holmes who covered a track and Beck.