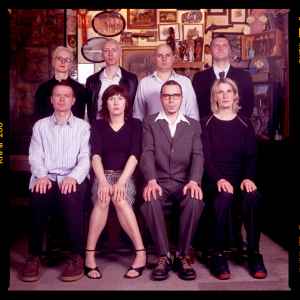 Profile:
This anarchist pop punk band is probably best known for the single "Tubthumping", which was everywhere in 1997, but probably less well known is the fact that this was taken from their eighth studio album, "Tubthumper".

Formed in a squat in Leeds, England, in 1982, Chumbawamba released their first single, "Revolution", in 1985. Up to a point they self-released most of their material on labels they ran themselves, such as Sky & Trees and Agit Prop. Their musical style has changed through the years, initially a shouting punk band, later recording some folk songs, then, with the "Jesus H Christ" album, they discovered electronic music.

That album, however, was built around numerous samples of other groups and, when they found out how much clearing them would cost, they scrapped it (though, it was released as a bootleg and, in recent years, via their chumbawamba.tv site as mp3s) and rerecorded the album without the samples and with a new focus on censorship.

"Anarchy" was their response to criticism from their contemporaries for their move into pop music, funny, political and musically experimental. The anti-Nazi song "Enough is Enough", recorded with regular collaborator MC Fusion, was released as a single and launched Fusion's new group Credit to the Nation. They had minor chart success, but nothing compared to what was to come.

The disappointing "Swingin' with Raymond" followed and was the end of their relationship with One Little Indian. Deciding that there's no such thing as a good capitalist, big or small, they signed with EMI, whom they had criticised in the past. The band were heavily criticised once again, but the massive worldwide success of "Tubthumper" allowed the band to fund numerous political campaigns around the world.

They were never to repeat the success of that single and proudly proclaimed themselves one hit wonders and their relationship with EMI only lasted one more album and a few singles. Independent again with Mutt Records, and with long-time producer Neil Ferguson now officially a member, they have continued to experiment with their style, recording "Readymades", mixing folk samples with dance beats, the soundtrack to the Alex Cox film "Revengers Tragedy" and their latest release, "UN", recorded on a mini disc in Latin America and at Chumbawamba's Bradford studio, mixing styles and sounds from different parts of the world.

Since then, the group slimmed down to just Lou, Neil, Boff and Jude, and added Phil Moody on accordion to play folk music with pop influences. The other members have moved on to their own projects.

Always controversial, often under attack from the left and the right, Chumbawamba have always done things their own way and, in their own words, "Never do what you are told."