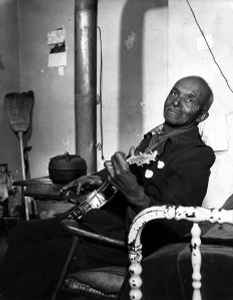 Gus helped popularize jug bands (such as his own Cannon's Jug Stompers) in the 1920s and 1930s. Recorded for Paramount under Banjo Joe in the 1920s.

Born on a plantation in Red Banks, Mississippi, Cannon moved a hundred miles to Clarksdale, then the home of W. C. Handy, at the age of 12. His musical skills came without training; he taught himself to play a banjo that he made from a frying pan and a raccoon skin. He ran away from home at the age of fifteen and began his career entertaining at sawmills and levee and railroad camps in the Mississippi Delta around the turn of the century.

While in Clarksdale, Cannon was influenced by two local musicians, Jim Turner and Alec Lee. Lee, a guitarist, taught Cannon his first folk blues, "Po' Boy, Long Ways from Home", and showed him how to use a knife blade as a slide, a technique that Cannon adapted to his banjo playing.

Cannon left Clarksdale around 1907 and soon settled near Memphis, Tennessee, where he played in a jug band led by Jim Guffin. He began playing in Memphis with Jim Jackson (2). He met the harmonica player Noah Lewis, who introduced him to a young guitar player, Ashley Thompson. Lewis and Thompson later were members of Cannon's Jug Stompers. The three of them formed a band to play at parties and dances. In 1914 Cannon began touring in medicine shows. He supported his family through various jobs, including sharecropping, ditch digging, and yard work, but supplemented his income with music.

Cannon began recording, as Banjo Joe, for Paramount Records in 1927. At that session he was backed by Blind Blake. After the success of the Memphis Jug Band's first records, he quickly assembled a jug band, Cannon's Jug Stompers, featuring Lewis and Thompson (later replaced by Elijah Avery). The group was first recorded at the Memphis Auditorium for Victor Records in January 1928. Hosea Woods joined the Jug Stompers in the late 1920s, playing guitar, banjo and kazoo and providing some vocals.

Although their last recordings were made in 1930, Cannon's Jug Stompers were one of Beale Street's most popular jug bands through the 1930s. A few songs Cannon recorded with the Jug Stompers are "Minglewood Blues", "Pig Ankle Strut", "Wolf River Blues", and "Walk Right In" (a pop hit for The Rooftop Singers in the 1960s and for Dr. Hook in the 1970s). By the end of the 1930s, Cannon had effectively retired, although he occasionally performed as a solo musician.

Cannon made a few recordings for Folkways Records in 1956. During the blues revival of the 1960s, he made some appearances at colleges and coffee houses with Furry Lewis and Bukka White, but he had to pawn his banjo to pay his heating bill the winter before The Rooftop Singers had a hit with "Walk Right In".

In the wake of becoming a hit composer, he recorded an album for Stax Records in 1963, with fellow Memphis musicians Will Shade (the former leader of the Memphis Jug Band) on jug and Milton Roby on washboard. Cannon performed traditional songs, including "Kill It", "Salty Dog", "Going Around", "The Mountain", "Ol' Hen". "Gonna Raise a Ruckus Tonight", "Ain't Gonna Rain No More", "Boll-Weevil", "Come On down to My House", "Make Me a Pallet on Your Floor", "Get Up in the Morning Soon", and "Crawdad Hole", along with his own "Walk Right In", with stories and introductions between songs.