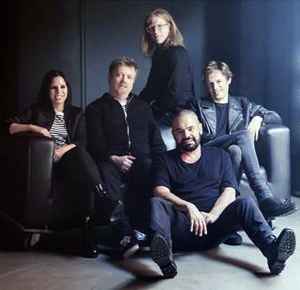 At the end of '81, Gold and Lloyd (Frank would come in not long afterwards) take part in a concert with 5 other artists, on Nelson Community.
Initially the band name was just Forever Young, however, after a few months they changed the name inspired by Jean-Luc Goddard's film: Alphaville "the city of the future". Which, incidentally, represented even better their whole project.

Mertens left the band in late 1984 and was replaced by Ricky Echolette (Wolfgang Neuhaus), in early 1985.

June 3, 2022
I'm a big fan of the trance music and psychedelic from the 90s, and i can't understand why this great tune "Kinetic" wasn't released on vinyl.... or I am wrong?
"Kinetic" is a great masterpiece.
Reply Notify me Helpful

April 10, 2021
Really frustrating that there isn't a decent CD compilation of these guys anywhere in the world. "First Harvest 1984-92" has the track listing, "Forever Young And Other Hits" the sound quality, and "Blank & Jones - So80s (Soeighties) Presents Alphaville" is excellent, but bypasses a decent anthology for a mixes and rarities collection. I would love remastered special editions of all the WB albums, but would settle for a decent 2-disc retrospective. I worry the time may have passed for that. These guy were at the top of the synth-pop game for a time. Their legacy should be treated better IMO.
Reply  See 2 replies Notify me Helpful