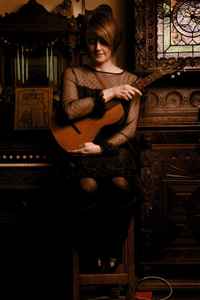 A former children's rights worker, Karine allows images, narratives, questions and wry comic asides to do much of her work. She tries never to say too much.

She holds a Masters degree in philosophy.

Following her debut album "Faultlines", which won Best Album at the 2005 BBC Folk Awards, and the 2006 successor "Scribbled in Chalk", Karine took time out to give birth to her son in 2007.

She then recorded two albums for release on her own micro label, hegri music.