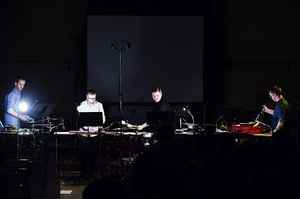 Architek has commissioned and/or premiered over 40 works by composers from Canada, France, Iran, Ireland, Israel, Japan, Luxembourg, Norway, Sweden, USA, and the UK. Several of these commissions have led to commercial recording projects, of which Architek appears on five: Bookburners (Nicole Lizée / Centrediscs, 2014), A Boat Upon its Blood (Jason Sharp / Constellation Records, 2016), Metatron (Eliot Britton / Ambiances Magnétiques, 2017), Katana of Choice (Ben Reimer / Redshift Records, 2017), and The Privacy of Domestic Life (Architek Percussion / Centrediscs, 2017). Architek’s diverse regular repertoire is at once engaging and challenging for audiences, and is presented in a manner inspired by the quartet’s belief that given proper context, no audience member should feel alienated by the nature of a performance of contemporary art music.