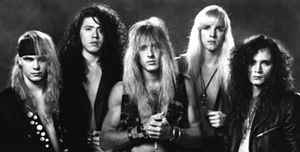 Profile:
Raquel burst onto the hard rock scene with a blend of powerful guitar rock and memorable melodies. The band gained notoriety with the song "Pop Goes the Music" which was featured on MTV in the early 90s. This marked the start of the relationship between the band and producer Toby Wright, who is now known for his work with Alice In Chains and Korn. The band was an east coast favorite, and still has around the world today.
Sites:
Facebook
Members:
Billy Covert, Eric Gadrix, Kevin McDonald (4), Ron English (4), Sean McDonald (3)