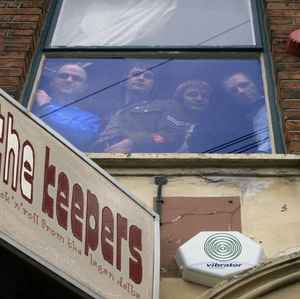 Profile:
The band first got together in Belfast around March 2000. Brothers Hugh (vocals, rhythm) and Norm (drums) had previously played in a mod rock band called The Cinnamon Firm which had recently broke up after several line up changes. The Firm were a popular live act in Ireland and had enjoyed a few local tv appearances and attracted interest from a couple of major record labels. At the same time Norm was also playing drums for a loud dirty garage rock and roll band called Thee Dreggs. Thee Dreggs vocalist and rhythm guitarist had recently left the band to set up home in Belgium. The members of the Cinnamon Firm and Thee Dreggs had been friends for years so it seemed like a natural solution to invite Hugh to get together with remaining Dreggs - Bobby (lead guitar), Will (Bass, Vocals) and Norm to form a new band. The merger brought Hugh's mod songwriting sensibilities together with raw rootsy garage band ethics. The new band was called THE KEEPERS. They managed to retain the essence and power of their old bands but with an added dynamic that gives them their own distinct brand of Belfast beat. it wasn't long before they had written a handful of songs. They recorded the tracks straight away while they were still fresh and vibrant to their ears, a philosophy they have continued through all their recordings. On May 24th of that year, the band played their first gig to a great response in front of 200 people at Belfast's Limelight club and have since been playing regularly around Northern Ireland and other places such as England, Rep of Ireland, Isle of Man, Holland, Belgium and Germany.

Their sound is ingrained with elements of garage rock, RandB, mod and punk but refuses to be pigeon-holed into any of these genres. The music is like a hit from an injected drug - instant, colourful, direct, loud, highly addictive rock 'n' roll that will mainline straight to your soul. Sick and tired of an endless slew of pop and shoe-gazing indie bands the Keepers are hitting back with raw ballsy rockin' tunes, Big ol' hairy monkey balls baby! But this is not protest music. These boys don't waste time protesting, this is DIRECT ACTION!

The Keepers' set is comprised mostly of well-crafted original material with a helping of cool covers of some of their favourite songs. Their hair-raising live reputation helped them land a weekly residency and their own club night (Balloon Farm) in Belfast's Duke of York bar, a savvy mixture of live rock 'n' roll and hip vinyl sounds which they ran for several months.

Their first single - 'Stop Pretending' was released in early 2001 and is available on seven inch vinyl from Barcelona's Butterfly Records label. The band have also released a five track CD on Italy's AUA Records as well as two self-released CD albums. Tracks by the Keepers are also available on compilation albums from labels such As El Torro and No Action.

So there you have it, good 'ol rock 'n' roll is alive and well in Belfast and these boys are the keepers of the faith. So, seek ye The Keepers and prepare for heaven!!
Sites:
SoundCloud, YouTube
Members:
The Blairmaynes
In Groups:
The Blairmaynes, Thee Dreggs