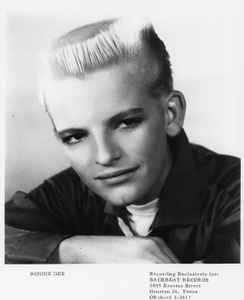 Born in Dallas, Texas and raised in Waxahachie, Texas, from 1935 to 1941 his father ran Pinky Dawson's The Manhattan Merrymakers dance band, which played every day on KRLD. The young Ronnie played French horn in the high-school band and double-bass every Sunday in church. However, he excelled as a guitar player and he was soon copying the records of Chuck Berry and Bo Diddley. Ronnie's professional music career began in the late 1950s when he found success with singles like Action Packed / I Make The Love (under the alias Ronnie Dee) and Congratulations To Me / Rockin' Bones under his nickname 'The Blonde Bomber'. From 1961 until 1969, he sang and played with the The Levee Singers, who often appeared on national television shows, and did session work. One day, at the end of another artist's session, he tore into Do, Do, Do and this led to more rockabilly recordings, released either under the name of Snake Munroe or Commonwealth Jones. In the late 1980s, a renewed interest in Ronnie's rockabilly recordings developed in Europe, and he continued to perform all throughout the 1990s, up to his untimely death in 2003 at the age of 64.