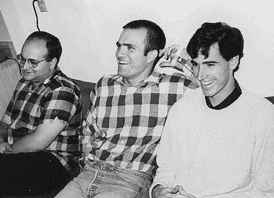 Profile:
Nothing Painted Blue was an American indie rock band led by songwriter Franklin Bruno since the 1990s. Bruno and drummer Kyle Brodie have been the only constant members as the remainder of the line-up has undergone a number of changes throughout the band's existence. They formed in 1987 in Los Angeles and released their debut LP, A Baby, A Blanket, A Packet of Seeds, in 1990. Bruno and Brodie were previously in the band Born Leaders.

The band sometimes spelled their name as "N∅thing Painted Blue" (abbreviated "∅PB"), a use of notation for the empty set in mathematics. References to mathematics are common in their songwriting and iconography (Bruno's undergraduate degree was in mathematics); for example, their 1998 record was named after the Monte Carlo method.
Sites:
allmusic.com, realscatrecords.com, trouserpress.com, Wikipedia
Members:
Franklin Bruno, Joey Burns, Kyle Brodie, Michael Neelon, Peter Hughes (2)
Variations:
Viewing All | Nothing Painted Blue
0pb, NPB, Nothing Painted Blue All-Stars, Nothingpaintedblue, Ø N.P.B., ØPB