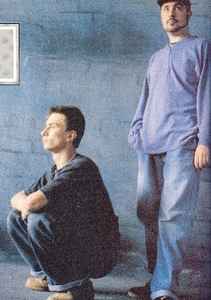 Profile:
Mark Archer and Chris Peat from Stafford, England, had already worked together on various releases on the Blue Chip label when they finally teamed up as a duo and formed C&M Connection in 1989. After only one 12” release, "Another Night", they gave up that name and became Nexus 21.
The first Nexus 21 release was "(Still) Life Keeps Moving", a vocal techno tune today regarded as an early classic. They followed this up with their outstanding sole LP "The Rhythm Of Life", which was strongly influenced by Detroit techno, but also included acid house, electro and breakbeats elements.
After the release of the album, Blue Chip folded, and Nexus 21 found a new home in the just founded Network Records. Meanwhile, R&S snapped up "Logical Progression" and "Techno City" from The Rhythm Of Life and released them on 12”. KMS released a set of Detroit remixes of "(Still) Life Keeps Moving" by Carl Craig / Mark Kinchen / Kevin Saunderson.
The first Archer / Peat releases for Network were licensed versions of Another Night and the Detroit remixes. Then the pair tried out yet another alter ego and released the "Overload EP" as Altern 8. They came back to being Nexus 21 for the deep techno of "Self Hypnosis", their contribution to the Bio Rhythm compilation. A remix of Self Hypnosis then appeared on the "Progressive Logic EP", alongside "Together" (from Bio Rhythm 2) and two tunes from The Rhythm Of Life, one remixed.
A second Nexus 21 album was ready in late 1991, but due to sample clearance problems, the LP never materialised. A small edition of white labels of "I Know We Can Make It"/"Sychologic PSP" was released, which showcased a bigger hardcore influence.
After the success of "The Vertigo EP" and "Activ-8", credited to Altern 8, Mark Archer and Chris Peat concentrated on that project. They still used the Nexus 21 name for occasional remixes.

December 29, 2016
They were recommended to Network Records by Neil Macey. Upon signing they were given an advance of £1,250.
Reply Notify me 4 Helpful