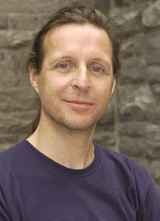 Jean-François Denis studied at Mills College in Oakland (California, USA) under David Rosenboom (MFA, 1984). He has worked in live electroacoustics (solo and in ensembles) and works for dance and multimedia since 1982.

He has taught electroacoustics at Concordia University (1985-89) in Montréal where he also directed the Concordia Electroacoustic Composers’ Group (CECG) annual concert series. He was the editor of the CECG Tape Collection catalogs “Q/Résonance” (1988) and “Q/Résonance Addendum” (1989). Jean-François Denis was a member of the organizing committee of the Festival/Conference 2001(-14) (Montréal, May 1987).

In 1994 he was awarded the Canadian League of Composers (CLC) Prize for his exceptional commitment to Canadian composers. In 1995 he was presented the Jean A Chalmers Award for Musical Composition—Presenters’ Award for his contribution to the diffusion of new Canadian (electroacoustic music) work.

Jean-François Denis is one of the three co-founders of Réseaux des arts médiatiques (1991) which produces the “Rien à voir” concerts series in Montréal since 1997. He has also been on the board of directors of the Conseil québécois de la musique (CQM) for many years, until September 1998. He is currently a member of regional council of the Canadian Music Centre — Québec Region (2001-) and on the board of directors of the Canadian Music Centre — National (2002-), Et Marianne et Simon (2001-), Filles électriques (2001-), and The SOCAN Foundation.
Variations:
Viewing All | Jean-François Denis
Jean-Francois Denis