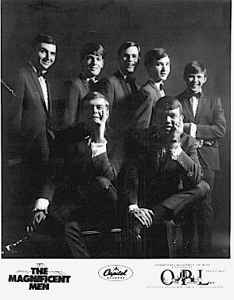 Profile:
In 1964, The Magnificent Men, the only white act to ever headline New York 's legendary Apollo Theatre and the other major stops on the rhythm and blues "chitlin circuit," was formed from the improbable combination of two integrated bands. York, Pennsylvania's Del-Chords, a seven-member group that featured singers Dave Bupp and Adrian "Buddy" King, often played Battle of the Band contests against Harrisburg's nine-member Endells, led by drummer Bob Angelucci. By the end of the year, Bupp, King, Angelucci, and some of the Endells began playing as the all-white Magnificent Seven, a change spurred by the unwillingness of some in both bands to become fulltime musicians, a quest for a new collective sound, and the reluctance of
some club owners to book mixed bands.
The members of the band are Bob Angelucci, Dave Bupp, Terry Crousore, Buddy King, Tom Pane, Bill Richter, and Jim Seville. In addition to these seven, the group's original keyboardist was Tom Hoover. Tom left the group after the first album, and has just recently passed away.
Sites:
magnificentmen.org
Aliases:
The Del-Chords, The Maggs
Members:
Bobby Angelucci, Buddy King, Dave Bupp
Variations:
Viewing All | The Magnificent Men
Mag Men, Magnificent Men, The Magnificents