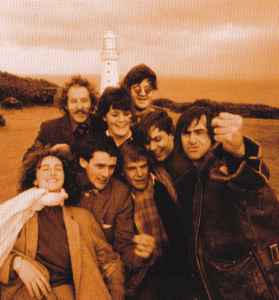 Formed by singer-songwriter Shane Howard in the late 1970s, they produced three full albums, and a very rare four song EP record. The original name of the band was "The Goanna Band", which was the name used on the EP release in 1979. However, the original name was soon shortened to simply "Goanna" by the time that the album Spirit of Place was released in the early 1980s. They were signed to WEA Australia.

Goanna's début album Spirit of Place won the ARIA Best Album of the Year for 1982, with their first major hit, "Solid Rock", winning Best Single of the Year. This song touched on the displacement of aboriginal tribes by the encroaching European settlers. It became a worldwide hit, and was the first rock record to feature extensive use of an Australian didgeridoo, one of the world's oldest wood instruments. Goanna also recorded "Let the Franklin Flow", a song about the ecological damage to be caused by damming Tasmania's Franklin River for hydroelectricity, and "Sorry", a song about Australia's "stolen generation" of aborigines.

The band performed three songs for the 1985 Oz for Africa concert (part of the global Live Aid program) - "Common Ground", "Song for Africa", "Solid Rock". It was broadcast in Australia (on both Seven Network and Nine Network) and on MTV in the US.

Shane Howard and his bandmates, including sister Marcia Howard and friend Rose Bygrave, have all recorded solo projects in addition to their time in Goanna.

The members of the group do not rule out future Goanna recordings and have never officially disbanded. The 1998 album "Spirit Returns" is reportedly a result of the group's members desire to "get together" again and make a musical statement.

In October 2006, a number of Goanna's songs have been featured in the Triple M Essential 2006 Countdown of songs (which was voted and chosen by the listeners) including: