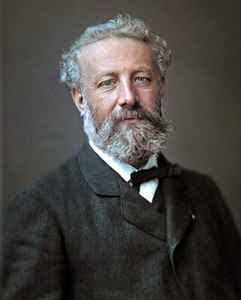 Real Name:
Jules-Gabriel Verne
Profile:
Born 8 February 1828 in Nantes, France.
Jules Verne was an author of fantastic novels such as "Journey to the Center of the Earth", "From the Earth to the Moon" and "Around the World in Eighty Days", writing about topics long before the means to do so were even invented. As such, he can be considered a pioneer in the not-yet-coined field of science fiction.