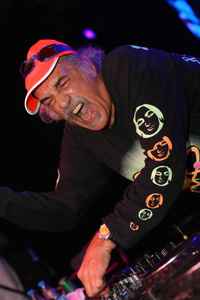 Real Name:
Ronald Rothfield
Profile:
Born 1941 in Melbourne. Raja Ram left Australia in the 50s to begin the hippie trail. He returned to study flute at the Melbourne conservatory, and then went to New York in 1965 to study jazz and improvisation. In the late 60s in London's Notting Hill Gate he formed Quintessence, a jazz-fusion Indian rock band that went on great success with 5 albums and over 400 live performances.

However in the early 70s due to personal reasons, he retired to become an envelope salesman. In the early 80s with the advent of synthesizers Raja Ram was inspired to return to performing. A trip to Goa in 88 coupled with the acid house summer of love in England revealed to him a new genre; the electronic world of psychedelic music. He worked for many years with Graham Wood under the name The Infinity Project, producing seminal tracks such as “Stimuli”. In 1994 Raja Ram had the brainwave to create TIP Records, which folded in 1998 after the collapse of their distributor. In 1999 he started the label TIP.World, which in 2009 was replaced by a new label under the original name TIP Records.

He began DJ'ing in '98 as this seemed a natural addition and progression to performing live. He is known for his work as “Shpongle” with Simon Posford, as the creator of 1200 Micrograms with Riktam and Bansi of GMS, and Chicago, and has had many collaborations with psy-trance artists globally. He is constantly touring, DJ'ing, performing live and recording in the studio, being one of the most in demand artists on the scene.
Sites:
Facebook, Wikipedia, Posterogs
Aliases:
Ron Rothfield
Variations:
Viewing All | Raja Ram
R. Ram, R.Ram, R.Ran, Raga Ram, Raj, Raj Ram, Raja Ram Rothfield, Raja-Ram, RajaRam, Ram, Shanti Raja Ram, The Raja Rambles