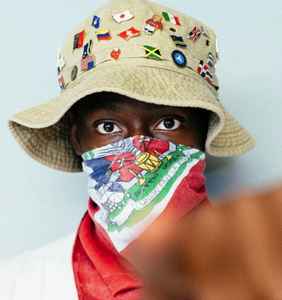 Profile:
New Jersey-based rapper and producer Mach-Hommy became a cult figure through his tireless work ethic and the sheer quality of his work as well as his elusiveness. His dense, tightly wound lyrics, loaded with deadpan one-liners, are heavily related to the social and political history of his Haitian heritage -- he often raps in Kreyol, and a Haitian flag folded into a bandana obscures his face nearly every time he is photographed. He is highly protective of his art, forbidding lyric sites to post transcriptions of the words to his songs, and he charges hundreds and even thousands of dollars for his releases, most of which aren't available on streaming services.
Sites:
billy-z.com, mach-hommy.com, SoundCloud
Aliases:
Dumpmeister
Variations:
Viewing All | Mach-Hommy
Mach Hommy, Mach-Homey, MachHommy