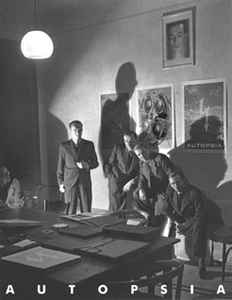 Profile:
Autopsia is a depersonalized art project dealing with music and visual production. Autopsia gathers authors of different professions in realization of multimedia projects. Its art practice began in London in the late '70s of the last century, and continued during the '80s in art centers of the former Yugoslavia. Since 1990, Autopsia acts from Prague. At the beginning of its activity, Autopsia issued a dozen of MC's, in the period after 1989, twenty CDs were issued, at first for Staalplaat from Amsterdam, then for German label Hypnobeat and London's Gymnastic Records. Autopsia's music can be found on numerous compilations issued all over the world. One of its compositions is a part of the soundtrack for Peter Greenaway's film "Pillow Book". Music production of Autopsia is associated with a large graphic production which consists of original graphic objects, design of flyers, booklets, CD's and a web page autopsia.net, with its offsprings: Autopsia TV and Illuminating Technologies.
Sites:
autopsia.net, Bandcamp, illuminating-technologies.com
Aliases:
Hussite, Splendor Solis
Members:
Radovan Milinković
Variations:
Viewing All | Autopsia
Achtar

November 15, 2014
I always found Autopsia more interesting and creative than Laibach, they have never choosen the easy way for their music and they are always in research on their sound. They are unique if you consider the whole of their discography.
Reply  See 2 replies Notify me 2 Helpful

It's very easy to think of Laibach when one thinks of ex-Yugoslavian experimental music, Autopsia however were perhaps the original industrial group in the area, formed in Ruma in 1979 and working on the theme of Death. Since 1980, many cassettes were released and occasional exhibitons and live performances took place, they also created numerous pieces of art, immersed in obscure emblems and symbols from alchemy, the occult and religion (which are not the primary theme of Autopsia however). Their music in the early-to-mid 1980's period could range from ritual ambient, to looped martial pieces to disorientating industrial (Oscularum Infame, In Vivo etc.).
In 1991, Autopsia relocated to Prague, where the sound became more ambient/neoclassical based (The Silence of the lamb, Humanity is the Devil etc.) and featuring the work of the Dammerung Orchestra for musical performance. Later in the 2000's, their sound became an interesting hybrid of neoclassical and breakcore/dubstep (Silently the Wolves are Watching, Radical Machines and Night Landscapes etc.). With a sound that is always evolving and their mysterious reputation still holding strong for 30 years, Autopsia is one of the most interesting groups to come from the original European industrial scene.

September 26, 2007
Autopsia can rightfully be called a pioneer of Dark Industrial. BUT: I would only back that for the releases that came out until 1992, which were mostly dark, eerie, ritual and positively lo-fi. These releases helped shape my understanding of music and made for contemplative listening. Everything from then on has much more of a compository, ersatz-neoclassical structure and fails to attract me in any way. I hope he still finds an audience, but Autopsia has always been shrouded in obscurity, so who can tell?
Reply Notify me 2 Helpful