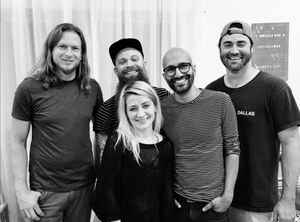 Profile:
Flyleaf is an American alternative rock band that formed in the Belton/Temple area in Texas in 2002 under the name Passerby. In October of 2012, the original vocalist, Lacey (Mosley) Sturm, left for various reasons and was replaced by the vocalist, Kristen May. Flyleaf has three full-length studio albums and several EPs with Sturm. In August of 2016, May announced that she will no longer continue with the band. Flyleaf has one full-length studio album and one EP with May.
Sites:
flyleafmusic.com, flyleafonline.com, Facebook, Twitter, instagram.com, YouTube, Wikipedia
Aliases:
Passerby
Members:
James Culpepper, Jared Hartmann, Kirk Patrick Seals, Kristen May, Lacey Sturm, Sameer Bhattacharya

March 14, 2008
I had never heard from Flyleaf before, but when they were playing as support act for Korn I thought "what a cool sound". Mosley on stage looks like an introvert closed person and that's how she's singing. She uses feelings in her voice, quite the same as Jonathan Davis does for Korn. She also has great screams as if she was furious about something. Only difference she has an amazing voice. She could easily start a solo singing carier and belong to the top! But the voice (and body) of Mosley is not the only thing I like about Flyleaf, the loud rock-music is why I can listen to this voice without being called gender-challenged. Everything together Flyleaf creates a new sound by not using grunts or opera vocals but a good voice with an occasional scream! Looking forward to hear more of them!