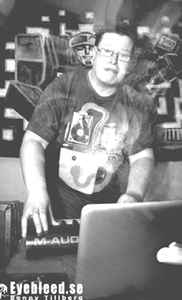 Real Name:
Daniel Jeppsson
Profile:
Back in 1997 when Daniel Jeppsson found a CD with a very unique & cool cover under the name ”Thunderdome”. This was the first time when he found the Hardcore sound and he loved it as soon as he started to listen to that CD.

In 1998 Daniel started to produce music for fun with Scream Tracker. After a few years he switched to Impulse Tracker to produce music as "Recall" and made several releases on different labels. Today he producing music with various daws including Cubase.

His Shadowcore project was started in 2006 when the first track "Life & Death" was released on Violent Recordings. Since then Shadowcore released tracks & albums on several labels like: Industrial Strength Records, Hard Kryptic Records, This Is Terror, Apocalypse Recordings, Digital Plague, From The Morgue & on his own label Machinecore Records.