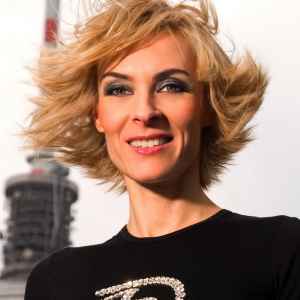 She is a presenter, music producer and actress, and a well-known representative of commercial electronic music. Their trademark was a time, their green-colored eyebrows. Occasionally Marion is named as her real first name. This name was given it because it was required by law earlier that the name had to be included in the passport of a German name book. Only with the abolition of this law in the early 90s she could officially assume their proper names.

In the early 90's she was the girlfriend of Fabian Lenz (DJ Dick), the brother of Maximilian Lenz (WestBam).

Marusha started DJing in 1990 and began her amazing career in 1991 in Berlin with her radio programme "Dancehall" which went out each Saturday on the young people's station DT 64. When DT 64 had to close, Marusha changed the frequency and the name of her show. The Berlin station "Fritz" carried Marusha's "Rave Satellite" once a week on 102.6 MHz. To top this, the media Multi-talent Marusha surprised German-speaking television audiences with "Feuerreiter", her TV programme for young people. For 2 1/2 years it was transmitted by ORB and later ARD, and it was very popular indeed.

1994 was Marusha year. "Somewhere Over The Rainbow" became her biggest hit ever. The following single "It Takes Me Away" was a similar success earning her a gold disc. In the summer of 1994 Marusha released her debut album "Raveland" which is still one of the most popular dance albums of all times.
Marusha's success story continued through 1995. She performed innumerable gigs at home and abroad at almost all trendsetting parties in the techno house scene and was awarded the "VIVA Comet 95" as "Best Techno Act", the "Echo Award 95" as "Best Female Artist National". Apart from this, Marusha was nominated "Best Female Artist" at the "MTV Award 95" in front of the Brandenburg Gate in Berlin.

January 22, 2022
thank u Marusha for alL you did with so much love. A massive impact for me and my friends who felL in love with Techno. Your radioshow and visits were the start point ( "save your ravechanneL DT 64" ).