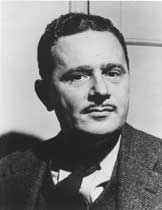 Real Name:
Abel Meeropol
Profile:
Abel Meeropol (born 10 February 1903, New York; died 30 October 1986, Longmeadow, Mass) was a Jewish-American poet and writer, who worked under the pseudonym Lewis Allan, which was derived from the names given to his two stillborn sons. He worked as a secondary school teacher until the 1940s. He was a member of the Communist Party, although (the timing/motive is unclear - somewhere between the increasing awareness of Soviet mass murders, or expedience to avoid being blacklisted) he later left. In 1954, he adopted the sons of Ethel and Julius Rosenberg, who had been executed in 1953 after passing atomic secrets to Soviet Union (other sources give 1957, which may just be the date of the formal legal adoption).