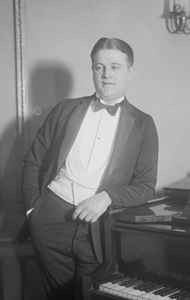 After performing off and on in local taverns and in vaudeville since he was a teenager, Austin first had success as a songwriter. His 1924 song "How Come You Do Me Like You Do?" (written with his vaudeville partner, Roy Bergere) became a hit for Marion Harris. In April of that same year, Vocalion hired Austin to lend his voice anonymously to several recordings by George Reneau, and by September, Austin and Reneau performed duets for Edison Records. In January 1925, another one of his songs, "When My Sugar Walks Down the Street" (written with Jimmy McHugh while both worked as staff writers for Mills Music) launched Austin's recording career with Victor, when he was asked to perform it in a duet with singer Aileen Stanley. As early as the next month, Austin was again in the Victor studio for a number of solo recordings.

Austin's soft, clear, and laid-back tenor voice was a good fit for the electronic recording technology introduced in early 1925 and made him one of the originators of the "crooner" style of singing (along with other singers of the time like "Ukuele Ike" Cliff Edwards, Art Gillham, Nick Lucas, Johnny Marvin, and Rudy Vallee). Soon, he became immensely popular. His 1927 recording of "My Blue Heaven", in particular, sold more than 5 million copies. After the depression hit and reduced record sales, Austin switched to radio. From 1932-1934 he had his own radio show performing in a trio with with bassist Candy Candido and guitarist Otto Heimal (a.k.a. "Coco"). He also performed in several movies.