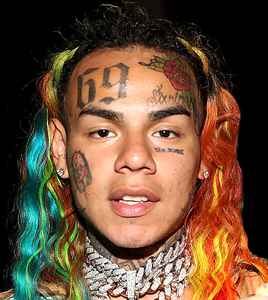 Hernandez rose to mainstream fame in late 2017 with the release of his debut single "Gummo", which was certified platinum by the RIAA.[5] In early 2018, Hernandez released his debut mixtape, Day69, which debuted at number 4 on the Billboard 200 album chart. He later earned his first top-five entry on the Billboard Hot 100 with "Fefe", featuring Nicki Minaj and Murda Beatz, which peaked at number three on the chart.

He was arrested in November 2018 on racketeering and firearm charges, among others, and was sentenced to two years in prison. In April 2020, he was granted early release. He was put on house arrest for the remainder of his term, and was released in early August 2020.
Sites:
Facebook, Twitter, YouTube
Aliases:
Daniel Hernández (5), Tekashi 69
Variations:
Viewing All | 6IX9INE
6ix9ine

March 25, 2019
69 is actually one of the better artists of the new generation. People do hate on him just because of his persona, but his music can be quite diverse and musically he is decent. His songs do slap pretty hard and they are good to put on parties. Free69
Reply Notify me 7 Helpful

May 14, 2018
Didn't think there ever could or would be anything worse than Lil Pump. I was wrong, very wrong.
Reply  See 3 replies Notify me 9 Helpful