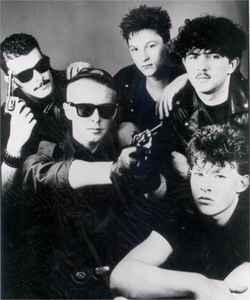 Following an appearance on Channel 4 TV show "The Tube" performing "Relax", the group were signed up by Trevor Horn and Paul Morley's new ZTT record label. With the benefit of Horn's production skills and Morley's off-the-wall marketing ideas, "Relax" came out in October 1983 and slowly but surely took off. It was already a top ten hit when, in January 1984, BBC Radio 1 DJ Mike Read suddenly realised what the song was actually about, leading to a total BBC ban on the disc. From this moment on, Frankie Goes To Hollywood became not just a pop group but a phenomenon. The record went to number one in the UK, and was a smash hit across Europe and even in the USA. "Frankie Says" T-shirts (some dreamt up by Morley, but far more the creations of small-time bootleggers) became the fashion statement of the year, and anticipation was at such a fever pitch that every subsequent FGTH release that year - two singles and a double-LP - went straight in at number one in their home country, an unprecedented achievement and a triumph for ZTT.

Now established as huge stars in the UK and Europe (though like so many other "British invasion" acts they were doomed to One-hit Wonder status in the US), Frankie spent much of 1985 on tour before starting work on their second album, the Stephen Lipson-produced "Liverpool". Trailed by the popular single "Rage Hard", the album came out in October 1986 but failed to reach the sale levels of "Welcome To The Pleasuredome".

There are many FGTH compilations, remixes and re-issues. Most of them includes something exclusive to that compilation, why is it worth collecting. There are countless of never previously released materials come to the light of the day. You have to watch carefully because many of the ZTT catalog-numberings and namings are missleading. There are a few issues I don't see listened here. For example The Rare Mixes from ZTT 1997. It only includes mixes were made originally at the Sarm studios and a track: My uncle....

It all started out with "Relax" which I first heard as a child. Bought the "Bang" album in the mid-nineties and got to know all their material more than a decade after their release. I was an instant fan and I still am today. My first group for which I felt profound admiration. Looking back, Horn's producing skills and the flair and nastiness of the group's members were a golden combination.