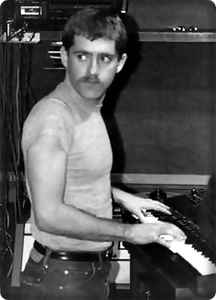 Cowley grew up in upstate New York where he worked in local rock bands and eventually studied English at the University of Buffalo. After moving to the Bay Area he began an intense study of the synthesizer at San Francisco City College.

Cowley's recording career began when he was asked to join San Francisco-based artist, Sylvester, in the studio after Sylvester heard what Cowley was doing with the synthesizer and was excited by his innovative techniques. The result was the album "Step II" which skyrocketed Sylvester to international notoriety. The album landed Cowley a job as a back-up musician on Sylvester's subsequent world-wide tour.

Cowley remained close to the San Francisco club scene and eventually joined forces with producer Marty Blecman to form Megatone Records in the summer of 1981. Under auspices of their partnership Cowley created a successful dance-oriented 12" single that opened the doors for his award-winning "Megatron Man" LP.

While writing the music for his latest album, he also wrote and produced the successful dance single "Right on Target" for San Francisco artist Paul Parker which reached #1 on Billboard's Disco Charts. He reunited with Sylvester during the same period and produced the chart-busting "Do You Wanna Funk", also on the Megatone label.

June 28, 2022
How much great music would Patrick have written, if not for the death from AIDS at such an early age. The most talented electronic musician, whose music always makes you dance. He would have been a real star (like Modern Talking in the 80s) in the 80s and 90s if he had lived. It's been 40 years, but his music still gives a lot of emotions to people and this is in 2022, not in 1982.
Reply Notify me Helpful

Can you imagine his music today!! Back in the day when he was far ahead of his time,, A sad loss to us all,, we love you Patrick and never forget you, God bless you we'll always love you xx

September 15, 2020
Get ready children of disco because Patti has a new LP and CD coming out October 18th, 2020 and it is cover versions he did privately for himself as well as for clubs. 6 trax on the LP and 8 on the cd. The only track known is the Donna Summer I FEEL LOVE remix he did BUT this one is the instrumental version. I wish they would have repackaged the 2006 2-LP set called Dance Floor Classics V.1, and add in the Dark Entries new trax coming out, as well as tossing in those other unknown-but-to-a-few remixes he did, like BACK IN LOVE AGAIN by L.T.D., etc.
Reply Notify me 3 Helpful

March 27, 2020
If I was asked who is the best electronic musician in the world, I would answer that it is Patrick Cowley. A genius who anticipated all electronic music, with all its styles and varieties. I listen to all his albums and get goosebumps from each of them. The most underrated electronic musician, the pioneer of electronics, the one who could have been a real star in the 80's and 90's.Words are not enough to describe the emotions that I feel listening to his innovative and BRILLIANT music.
Reply Notify me 7 Helpful

February 1, 2020
It is crazy that so much of his stuff is coming out that has been gathering dust (Dark Entries). The man has been gone for almost 40 years and he still blow people´s minds..
Bring it on.
Reply Notify me 2 Helpful

April 29, 2019
Dark Entries is preparing a fourth compilation of unreleased works, to be released in the coming months. Stay tuned...
Reply Notify me 6 Helpful

BTW. And this is so very true. I look like a tall version of Patrick Cowley. My hair grows like his, same color & used to be blonde when younger. I have the same facial features, eyes, moustache, etc.
I have a pic of myself underneath Patrick Cowley posed as he was & you'd swear we were twins, only I'm 6' 4" tall! :-)
I've had people in NYC & other places think I was him, but that's when I was younger (20's - 30's) I'm 47 now & still do look like him or what he would look like at my age.R.I.P. my dear twin brother Patrick ;-)

Patrick Cowley passed on Novemeber 12th, 1982 due to complications of HIV/AIDS. He will always be missed by me and many, many others. IMHO, Patrick's music had its own original sound & the work he did "patching" all those sounds in. Using turn knobs, not sliders like todays mixers, etc. His sound paved the way for trance, house, dance, disco, etc!
There is no denying that! :-)
Patrick is yet another who passed of this horrific "Human Immunodeficiency Virus". Many of our great talents died with HIV/AIDS. More than you'd ever think or know of!
They will Alawys be Remembered! :-)

Mr. Patrick Joseph Cowley passed on from complications due to AIDS. HIV is only the beginning. If you get that under control, then you may not get a rare pneumonia called Pneumocystis Carinii Pneumonia or other "opportunistic infections" e.g. Cancers one normally would never get, rare diseases, etc. If you have a Dx of one of these, then you get AIDS. Once you have AIDS, it's harder to get under control & AIDS IS NOT immune to straight people nor kids either! In my small city in Atlantic Canada there are at least over 2000 people under age 20 who are walking around HIV+
It is a horrific disease that can be treated very well now!
Anyhow, to get to the point, I have a beatiful pic of Patrick Cowley that DJ Harold Ranger gave me & I can make copies. Can I upload images to this site?

DJ Harold Ranger wrote in the corner of his pic:

I want to LIFT OFF and become a MEGATRON MAN.
I am full of MENERGY and heading for a TECH-NO-LOGICAL WORLD.
You being the MUTANT MAN, I put a LINE ON YOU and made you an X-FACTOR.
It was such a MIND WARP, that it became an INVASION.
THEY CAME AT NIGHT to TAKE YOU HOME. I'm now alone and GOIN'HOME to a TEEN PLANET.
It's such a PRIMITIVE WORLD, that they still go on a SEA HUNT.
THANK GOD FOR MUSIC and we all need to GET A LITTLE.

Backstage DJ Harold Ranger (some words I canged myself.)

P.S. (I'll upload my photo & I might sell some on photo paper for a fair price, as I have a photo printer.)

My deepest respect to Mr.Patrick Cowley. He was one of the visionary pioneers of the early electronic music scene, and his records and mixes became blueprints for many recent retro-ish releases. Sadly enough, he already passed away. All we have left is his legacy: spaced out, electrified disco music by the Megatron Man!