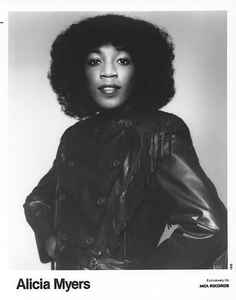 Born in Detroit, Michigan, U.S. she moved to Los Angeles in 1972 where she won a talent contest along with her brother Jackie Myers. She joined One Way in 1977 for three years and from 1980 she went solo, releasing four albums by 1984. She made a comeback with a fifth album in 2011. Her biggest hit is "I Want To Thank You" produced by Irene Perkins and Kevin McCord, ranked #5 in the Billboard RnB chart in 1980.
Sites:
soulwalking.co.uk, Wikipedia, whosampled.com
In Groups:
One Way
Variations:
Viewing All | Alicia Myers
A. Meyers, A. Myers, Alicia, Alicia Meyers, Alicia Nyers, Alicia-Myers, Alicia/Mayers, Allela Myers, Meyers, Myers

February 15, 2018
I Looking for Alicia Myers I want to thank yo (Acapella Version) Need Help Please?