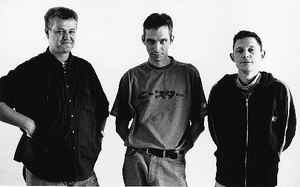 Profile:
Kapotte Muziek was founded in 1984 by Frans de Waard, then living in Nijmegen, The Netherlands. Soon he was joined by Christian Nijs, who also lived in Nijmegen. They did not actually play together, though: Christian would record all the sounds at home on cassettes and give them to Frans, who would manipulate the material in different ways (pitch-change, loops, etc.).
This way of working (using 'second-hand' material and recycling it endlessly) became the core of the activities of Kapotte Muziek.

In 1987 Christian left the project in favour of playing rock-music in a real band. Until 1993 Frans continued the project on his own through the Kapotte Muziek By ... series, inviting as many musicians as he knew to send in material to be recycled. This resulted in collaborations with groups like S.B.O.T.H.I., Merzbow, De Fabriek, Yeast Culture, Odal, Asmus Tietchens and many others. Gradually, the harsh territory of industrial music was left behind and other forms of electro-acoustic music were explored.