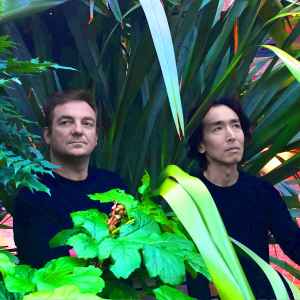 Susumu Mukai, originally from Kanagawa, Japan, has been involved in diverse projects such as Zongamin, Stalactite and Off World as producer and multi-instrumentalist. Mukai is also a member of bands including Fimber Bravo, Vanishing Twin and Floating Points.

Jean-Gabriel Becker, originally from Paris, France, has been writing music under various names and in numerous projects, from Jeanga And George and Economy Wolf to Lux Prima to name only a few. He also composes extensively for films and television under his own name.

Their recording sessions typically unfold as a musical dialogue between the duo –open-ended, discovering the sounds as they revealed themselves in an organic way.
Those sessions started as experimental and improvisational and typically evolved as the duo program and perform live on various electronic instruments, as well as guitars and other more unusual acoustic instruments, like trombone or exotic percussions…

Although some influences can be heard, from acid-house to krautrock, to jazz and psychedelia and occasionally world music, the otherness of Becker & Mukai's music refuses to be categorised easily.
Sites:
Bandcamp, soundsandsons.com
Members:
Jean-Gabriel Becker, Springmine Disaster, Susumu Mukai