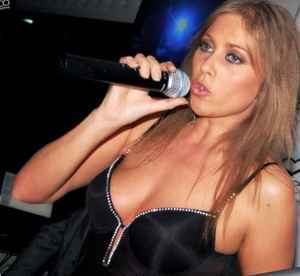 Real Name:
Sharon May Linn
Profile:
Sharon May Linn was born in the region of the Netherlands but has built her career in Italy.
She started to sing professionally at the age of 17 as a backing vocalist but soon as main vocalist in many bands. She featured in many Italian productions in the 1990's.
She also did some of the songs on the Blizzard and Sharon S projects. She sang the song "Dream" of Netzwerk, in 1997.
In the meantime, Sharon began to develop her creativity by writing lyrics, including, from that time on, the producing aspect of music.
For more than a decade, she has been working as a free-style vocalist with a huge number of world known housemusic DJ's, throughout the best clubs.
Back in 2003 Sharon May Linn wrote the song Destination Unknown, it became a hit thanks to vocals by Crystal Waters.
A lot of releases came out over the last years: one of her first hits was for sure Lil' Love with the song Little Love as session vocalist.
There are many hit productions Sharon May Linn has done and on which she's working on.
Her latest releases are with 3 Minds Twisted "Something's Going On", Melodica; White Shoes "No Control", Absolutely; with Wawa & DJ Gleb "Secret Land", Loud Bit; coming out next: with Lovematic "Take It Up", D:vision and with Rio De La Duna & Lucas Reyes "Push Me", S2G.
Sites:
sharonmaylinn.com, Facebook, Facebook, Facebook, Twitter, SoundCloud, SoundCloud, SoundCloud, YouTube, reverbnation.com, MySpace
In Groups:
Blizzard, Blue Lipstick, FPI Project, Friends Electric (4), Inside Out, Jaded (5), Jum People, Lil' Love, Morgana (21), Netzwerk, Nu Collective, Real Devotion, Shannon James, Sharon S, Smack It, Supacupa, Wienna
Variations:
Viewing All | Sharon May Linn
Linn, Linn, S.M., S M Linn, S. M. Linn, S. May Linn, S.M. Linn, S.M.Linn, Sharon, Sharon Linn, Sharon May, Sharon May Lin, Sharon May Lynn, Sharon'M.