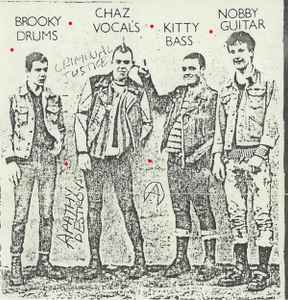 Profile:
Punk band from in Huddersfield, Kirklees, West Yorkshire, England, UK.
They formed in summer 1982 and made their live debut (an invites-only house party excepted) at the Fraternity Hall in Huddersfield that September, supporting The Macc Lads.
In 1985 they were the subject of an ITV documentary called 'First Tuesday', presented by Jonathan Dimbleby.
In 1983 they recorded the Criminal Justice demo, four songs produced by Xpozez members Tez and Trimble (both of whom later joined The Instigators). One track from this was used on the 'Eject It' tape.
Brooky joined The Xpozez as drummer soon after the demo, and continued to play in both bands for some time.
Two tracks from a second demo recorded in December 1983, 'Machines And Systems' and 'Middle East Mayhem', appeared on the 1984 compilation LP 'On The Street', and this was followed by their only single, the 'Hierarchy Of Hell!' E.P, which quickly sold out of its pressing of 1000 copies.
They split in 1986 after having switched to playing thrash metal under the name Damage Inc.
Nobby, Chaz, and Kitty went on to form a new three-piece band called Diekreist, who recorded a demo.