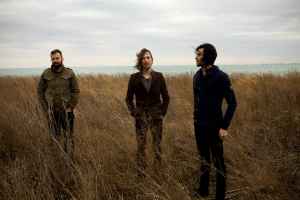 Profile:
Russian Circles is a three piece instrumental band from Chicago, Illinois.
They were formed in late 2004 by guitarist Mike Sullivan and bassist Colin DeKuiper, both ex-members of instrumental band dakota/dakota.
Drummer Dave Turncrantz, ex-member of Riddle Of Steel, joined soon after.
They self-released a 4 track CD-EP and signed with Flameshovel (US) and Black Records (UK) for their first full length on CD and to Hewhocorrupts (US) and Friction Records (GER) for the vinyl.
Another limited 7" came out on Suicide Squeeze. In the autumn of 2007, it was announced that the band had parted ways with Colin DeKuiper. As a result, the bass tracks on their second album, titled Station, were handled by ex-Botch/These Arms Are Snakes bass player Brian Cook (2), who then joined the band permanently. The group's third full-length, Geneva, was released on October 20, 2009 and reached No. 24 on the Billboard Heatseekers chart.

In 2011, Russian Circles signed to Sargent House who had previously only exclusively released the band's albums on limited edition vinyl. Their fourth studio album Empros was released on October 25, 2011. A supporting tour with Deafheaven followed the release. In May, 2013 the group began recording their fifth studio album, produced by Brandon Curtis. Memorial was released at the end of October 2013 and featured a guest-vocal by Chelsea Wolfe. Together they embarked on a co-headlining UK/European tour in the fall.

Russian Circles released its sixth studio album Guidance on August 5, 2016 through Sargent House. The album was produced by Kurt Ballou of Converge fame. In 2019, the band announced that they had begun writing on their seventh album to follow up their previous effort, Guidance. In May 2019, the name of the seventh album was revealed to be 'Blood Year' and would be released on August 2, 2019.

DAMN this band needs a helluva reissue campaign, so much of their stuff has been out of print and rare for so long. sergeant house should try making it happen with at least a few of their albums

speak of the devil, hellomerch is reissuing guidance and memorial:

August 1, 2020
Would I be correct in thinking the letters and roman numerals on the bottom of the cover design for Guidance relates to the catalogue number and year of release? SH · CLVIII · MMXVI = SH · 158 · 2016

April 9, 2018
Anyone else noticed a «knitting» sound on the drum recording on the album? I have the cd version

September 1, 2015
I'm a bit surprised that all the the LPs are described as either math rock or post rock, and nary a mention of metal. I get the other descriptions, but for post rock, they certainly rock, heavy... I'd say progressive metal.
See 2 replies