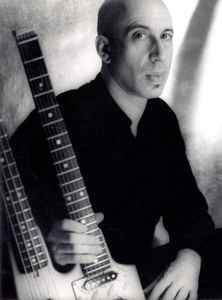 Profile:
Elliott Sharp (March 1, 1951 in Cleveland, Ohio, USA) began playing the piano at six and performing concerts by age of eight, according to him. Sharp claims that his parents wanted him to be both a concert pianist and a scientist. He gave up piano, first in favor of the clarinet and then the guitar. His interest in science led him to build his own effects boxes for the instrument. He became intrigued with all types of experimental music, from contemporary classical to free jazz and sophisticated rock. Sharp studied anthropology at Cornell University, where he played in a band and took an electronics class with synthesizer inventor Robert Moog. At Bard College he studied with free jazz pioneer Roswell Rudd (future Lounge Lizards John and Evan Lurie were classmates). He went to graduate school in Buffalo, where his academic advisor was Morton Feldman. He moved permanently to New York City in 1979, where he played gigs at various underground performance spaces, including the notorious ~Mudd Club. In the '80s Sharp became a major figure on the downtown New York experimental music scene, collaborating with many of it's most prominent players, including John Zorn, Wayne Horvitz, Bobby Previte, and Butch Morris. Over the years, Sharp has led his own bands more often than not. His music draws upon the wide range of his influences, from Coltrane to Zappa to Xenakis and beyond.

May 26, 2018
whoever wrote this bio doesn't like mr sharp too much
See 2 replies