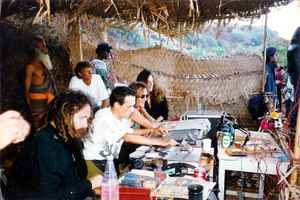 Profile:
Taking his early influences from the beach parties that so amazed him in Goa during the middle to late eighties and combining them with the original spirit of acid house, Dave Mothersole started Dj'ing in 1990. He initially made a name for himself on the early tech house scene playing at parties like Wiggle and Heart & Soul. He quickly developed a style that defied categorisation by seamlessly fusing deep soulful techno and gritty bass line fuelled house with ethereal otherworldly electro .

Fantastic DJ. Consistantly produces cutting edge sets and plays great new music from different styles. Backed up with a knowledge of electronic music that spans back to the mid 80's nu-beat days. Check him out at a club if you get the chance.