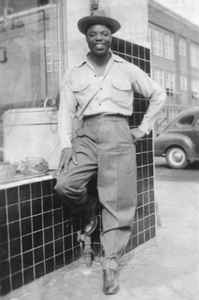 US-American songwriter from Jacksonville, (b. September 17, 1913 – d. December 12, 1985) best known by the moniker “Charlie Hoss," and who is best remembered for his lyrics to "Strangers in the Night," sung by Frank Sinatra. "Strangers..." became a number-one hit and revitalized Frank Sinatra's career in 1966. He co-wrote the song with Eddie Snyder, who adapted it from a melody by German bandleader Bert Kaempfert. He received six Grammy Awards for the song. In 1954, Singleton teamed with songwriting partner Rose Marie McCoy, immediately having a hit with 'It Hurts Me to My Heart' with Faye Adams. The partnership lasted eight years. Singleton's other major success was the pop standard "Spanish Eyes," another team effort with Kaempfert and Snyder. His friend Nat King Cole also recorded Singleton songs, including "If I May," "Just As Much As Ever," and "Again." Charles passed away in 1985, after producing a score of platinum albums.

From an early age, Charlie sang, danced, produced shows, and wrote music and lyrics. He attended local schools and graduated from Stanton High School class of 1935. The young Singleton was well known for his local musical extravaganza, April Frolics, which was staged at various nightspots in LaVilla. By December 1950, Charlie was off to New York City with a portfolio of lyrics. Right away Decca Records hired him. He scored five songs on the Top 10 Charts at the same time, and successful sales were accomplished as well with Elvis Presley’s recording of Singleton’s "Spanish Eyes." The Jacksonville singer-songwriter wrote other songs, including “Mama He Treats Your Daughter Mean” for Ruth Brown. Among the other artists who recorded his songs were Johnny Mathis, Bill Haley, Wayne Newton, Andy Williams, Pat Boone, Ella Fitzgerald, Peggy Lee, and The Beatles. "Strangers in the Night" was also selected as one of the Songs of the Century by the Recording Industry of America Association (RIAA) and the National Endowment for the Arts (NEA). Two of his songs ("Strangers" and "Spanish Eyes") were selected by Broadcast Music Incorporated (BMI) as one of the Top 100 Songs of the Century.