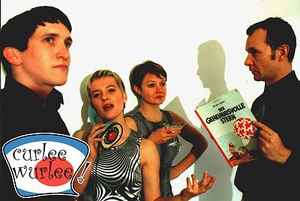 Real Name:
CURLEE WURLEE!
Profile:
CURLEE WURLEE! has a unique style: "It's easy to recognize their style among tons of other bands" (No Brain Zine, NL). Fronted by their French female song-writer / organist and accompanied by three other well-known musicians, their songs are a schizophrenic mix of intricate compositions influenced by 60s garage punk, French drama, beat, punk and neo-garage, potentially surf/exotica or power pop too, with their very personal talent on top.

Although CURLEE WURLEE! belongs to the most original garage bands of the decade, they're quite an absurd bunch of nuts, and their live performances are most of the time turning into a degenerating bash.

NEWS: New album BIRDS & BEES out NOW on Moody Monkey Records, and 7” available on copaseDisques in the run of 2016!!!