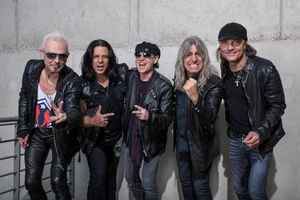 Profile:
Hard Rock band formed in 1965 in Hannover, Germany by Rudolf Schenker.
They are a band who experimented with many styles of Rock music including 1970's Hard Rock and 1980's Hair / Glam Metal (Heavy Metal).
Known for their 80's rock anthem, "Rock You Like a Hurricane," as well as other popular songs such as, "No One Like You", "Send Me an Angel", "Still Loving You", and "Wind of Change", Scorpions were ranked #46 on VH1's "Greatest Artists of Hard Rock" television program. "Rock You Like a Hurricane" is also #18 on VH1's list of the 100 Greatest Hard Rock Songs. On January 24, 2010, after 45 years of performing, the band announced that they would be retiring after touring in support of their new album "Sting In The Tail". However, after enjoying the tour they decided to continue. New songs were written and new albums were released. As well touring continued. The band sold over 100 million albums worldwide. Other sources even mention album sales in excess over 150 Million.
Sites:
the-scorpions.com, Facebook, MySpace, Wikipedia, Wikipedia, YouTube, Twitter, instagram.com
Aliases:
The Hunters (8), The Rasselbande
Members:
Achim Kirschning, Curt Cress, Francis Buchholz, Herman Rarebell, James Kottak, Johan Franzon, Jürgen Rosenthal, Klaus Meine, Lothar Heimberg, Luke Herzog, Matthias Jabs, Micael Kiriakos Delaoglou, Michael Schenker, Paweł Mąciwoda Jastrzębski, Ralph Rieckermann, Rudolf Schenker, Rudy Lenners, Ulrich Roth, Werner Löhr, Wolfgang Dziony
Variations:
Viewing All | Scorpions
Scorpion, Scorpionce, Skorpions, The Scorpions, Скорпионз, Скорпионс, Скорпиънз, スコーピオンズ, 蝎子乐队

July 31, 2021
I'm definitely in the early camp days, the first seven albums are the bomb - then starting with Animal Magnetism, things started getting 'poppier' (or poopier, I should say) - then they totally lost me with 'Blackout' - I remember giving it a few spins and selling it right back to the record store - and by the time of 'Rock You Like A Hurricane', well I was singing along with 'Rock You Like A Herd Of Cans' !

November 7, 2017
I've got a pretty nice lp,tape & cd collection of 80's heavy metal music but i will have to admit that the Scorps are in my TOP 5 favorite bands of my heavy metal collection.

October 27, 2016
These guys are phenomenal with Michael Schenker, Uli Roth or Mathias Jabs doing lead. All 3 rock and their progression from Lonesome Crow up to Crazy World is quite the run. I haven't listened to much after that except for Acoustica (which is also great) but this was the main band that took me through my teenage days.