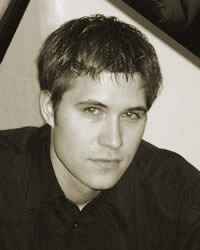 Profile:
Johan Sandback was born in Uppsala, Sweden where he started playing the piano at the age of six.
After graduating from the Royal University College of Music in Stockholm he studied with Prof. Aaron Shorr at the Royal Academy of Music in London. In 2002 he took his Postgraduate Diploma in solo performance and won the prestigous competition, Carpenter Piano Recital Prize at the Royal Academy.
Johan has taken part in masterclasses in Europe with Dimitri Bashkirov, Jiri Hlinka, Paul Roberts, Hans Leygraf and others. He has won first prize in several other competitions, including Ivar Rondin Competition and Pulcinella Piano Competition, and has received scholarship awards from the Academy of Music in Sweden.
As a performer he has, besides giving solo recitals, been specializing in the duo repertoire for piano and string instruments.
Johan is also a devoted piano teacher and is since 1999 a member of the board of EPTA Sweden.
Sites:
johansandback.com