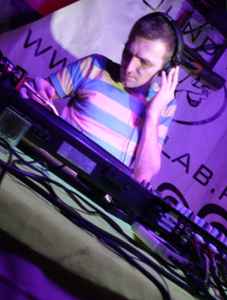 It has encompassed torturing Goa trance ravers with esoteric techno records on Welsh hillsides in the mid 90s, hanging with UK house heads like the DiY and Smokescreen sound-systems around quarries, fields, clubs and pubs in the Midlands, after which he found his initial niche in producing punky techno around the turn of the millennium for labels like Djax Up Beats and Mosquito.

After an 8 year stint producing, releasing and playing out proper underground house music as Marquis Hawkes on labels like Houndstooth and Aus Music, making techno records for DVS1’s Mistress imprint and Len Faki’s Figure recordings as Juxta Position, alongside other work under the names Contactless and Falcon Black Ops for Unknown To The Unknown, Hawkins now embarks on the next phase of his career, which will gradually amalgamate his broad influences into one unique sound.
Aliases:
###, Contactless, DJ M.H., Falcon Black Ops, Juxta Position, Marquis Hawkes, Phoenix Knight, The Spider (3)
In Groups:
M25 (2)
Variations:
Viewing All | Mark Hawkins
Hawkins, Hawkins, Mark, M. Hawkins

January 21, 2023
I'm so happy for Mark. From the relatively little niche around Ugly Funk, Chan'n'Mikes and such in the early 2000's with its very own take on Techno, to now having big gigs all over the world and reinventing himself as a musician as a house producer!

Congrats! Keep it up! But still for me you are best remembered in clubs like 10/40 in Leipzig :)