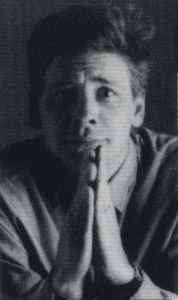 Profile:
Gregory Whitehead is the writer, director and producer of more than one hundred radio plays, essays and acoustic adventures for the BBC, Radio France, Australia’s ABC, NPR and other broadcasters.

Whitehead is a frequent performer in literary cabarets and mixed media theater events, as well as a featured guest speaker at conferences and audio festivals throughout the US and Europe. He has collaborated with Mark Sussman and Allen Weiss on a Theater of the Ears, and has also experimented with small-scale puppet and toy theaters.

Whitehead is the co-editor of the anthology of writings on the history of radio and audio art, Wireless Imagination: sound radio and the avant-garde, and the author of numerous essays that explore the politics and paradoxes of radiophonic space.
Sites:
gregorywhitehead.net, ubu.com
Aliases:
Vicekopf
Variations:
Viewing All | Gregory Whitehead
"Greg" Whitehead, GW, Greg Whitehead