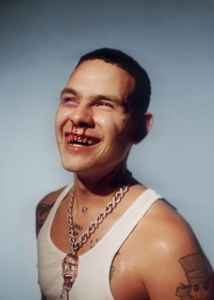 Well known for his notoriously gritty and rough instrumentals and raw, politically charged lyrics, especially around Brexit and Theresa May’s tenure as Prime Minister of the UK. His stage name originates from his childhood nickname; Frampton had a speech impediment which caused him to speak slowly and with a drawl. Originally known as Slow Ty, he changed it to Slowthai when he released his first single in 2016.

April 27, 2019
Drug Dealer is some serious shit! Hope this is on the LP on vinyl when it drops soon!
Reply Notify me 2 Helpful